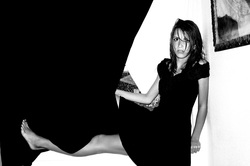 My first work in progress is titled When No One was Listening
Sloane Christianson is forced to move back to her home town after being suspended from school. Back to the town that stomped on her after the untimely death of her twin sister Sarah. Sloane still hears Sarah in her head, deemd crazy by everyone around her Sloane struggles to get through High school.
Plagued by new found popularity bestowed upon her by her childhood crush and now high school football star boyfriend, Sloane wrestles between trying to be normal and trying to be herself. Her world is turned upside down by the strange dark eyed bully Barrett as well as her new beady eyed step father. Who's a bigger threat the boyfriend, the bully, the step father or Slaone herself. Look for When No One was Listening to find out!
Sample
SLOANE

My fist slammed into her perfect face, pushing five grand worth of a nose
job sickeningly to the right. Detached I watched as the most popular girl in
school stumbled, holding her hands over the wreck I’d made of her looks, no one
would ever believe it was my dead sister’s  fault.
Oh crap, I just punched the prom queen. I have these kinds of moments far too often. Tiny blips in time where nothing else
matters except Sarah, moments when I can still hear her in my ear urging me on.
I think I’m crazy. I  know for sure that I am alone, I am broken, and I am a murderer. Some things can
be pushed down deep inside of you, but if you can still hear your dead twin’s
voice in your head, even if it’s not that often, well then they aren’t deep
enough.


Other works in progress to come soon! 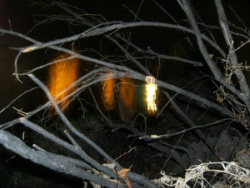 Weary and worn, beaten
by the sun and swallowed by the wind he pushed on. Trudging diligently next to
the convoy truck. The deafening roar of the engine the only sound on the cities
deserted street. His eyes darted to every doorway, over every rooftop, his
finger twitched,aching to hug his trigger.
"This is bullshit" His sand  scrubbed voice shocked him as he continued on. Everything seemed to stop and
throb before his eyes right before he heard death screaming towards him.

"RPG!!" He screamed as he dove for cover. His body engulfed in hells flames, the
excruciating heat is the last thing he remembered.

Unconscious, a
tattered body laid in a hospital bed, thousands of miles from the conflict that
put it there. A shell of a man, gaunt and broken, he moans and stirs but never
wakes. Behind his tight closed lids he relives his nightmare and his salvation
over and over.

The smoke from the rpg slowly wafts along the breeze,
exposing the bodies of his friends scattered around him. Their blood wetting the
sand, their cries silenced by the cold hand of death. From the smoke emerges a
woman, barefoot and unscathed by the flames still licking at the ground around
him. A pure white gossamer gown flows around her as she glides towards him.
Raven black hair whips wildly in the wind, and even through the remnants of
smoke he can see her ice blue eyes.

"Oh shit, I'm dead."
She placed
her ivory hands upon his face and a healing current of cold ran through him. The
sound of a thousand horses thundering across his brain pounds in his ears. Her
perfect lips begin to move.

Everything around him disappears as her soft lips touch his.
They are enveloped in a gleaming flash of light.

Lying on his back,
I.V.'s and wires adorning him like Christmas lights a smile crosses his face. A
buzzing from the hall alerts the night nurses.
"Hey Betty, you're boys heart
rate is up again."
"Halfway there Tom, thanks!"

So far this is
turning out to be a story about the Devil's rebellious daughter, an injured
soldier, a saintly nurse and a fight for one man's soul. What do you
think? 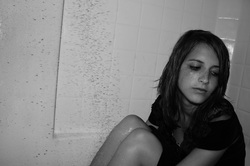 It Didn't Happen to Me
A group of twenty students stood around
Lane, giggling and going on as he muffled the sound coming from his cell phone with his hand. The sound didn’t matter, the sound was fake, Ainsley knew the truth.
She watched in horror and disgust as the
boys in the group cheered and high fived one another. She didn’t need to get up;
she didn’t have to move closer to know what they were watching. The acidic bile
taste from first period still clung to the back of her throat. A burning
reminder of things she would never forget. Ainsley let her eyes slip closed as
she laid her head on the cool particle board desktop as the mornings events
replayed in her mind.
The fight with her mother in a vain effort
to avoid today had only slowed down her arrival to school. Her mother was
adamant that Ainsley not miss the first day at her new alma mater. The fear
walking up to the front office, her mother striding joyfully beside her, caused
even more anxiety. No one looked at her. No one pointed, or shouted as she
arrived, but these little triumphs gave her no relief. It was coming, she could
feel it.
With ten minutes until the tardy bell first
period was a riot of movement and noise as students clambered over desks and
shouted greetings across the room. Ainsley sat in the far corner,
tightly tucked into her desk, knees at her chest, head down, trying to
disappear. Then she heard it, and her stomach dropped.
“Oh my God.” A blonde girl two rows over
shouted as she held her cell phone away from herself in disgust.
“Lindsey, look at this!” She passed the
phone to a red haired girl who cringed and tossed it to the boy behind her.
Without looking up Ainsley knew it was getting closer to her just like she knew
without looking what the class was repulsed by.
A hand shook her roughly and she had to
make a choice, keep her head down and hide, hoping they wouldn’t look at her
again, or glance at the phone and hope she didn’t vomit on the desk. Gathering
her nerves she looked up as a pimply faced boy shoved the phone at
her.
“Look at this, it’s crazy!” He laughed
handing her the cell.
There trapped inside the tiny rectangle  screen was a pair of hot pink Chuck Taylors, hanging limply over the edge of a  bed. The angle of the camera came almost from the floor a few feet from the bed.
It hid the upper body in a shadow, what could be seen after watching only three
or four minutes was a line of jeans each taking a turn crawling over the body on
the bed. Her sight narrowed in on the hot pink shoes, every few seconds they
would bounce against the bed then stop as a new pair of jeans came into the
shot. She refused to count them, some things should remain a mystery. Towards
the end of the video the shoes jerk and begin to kick at the most recent pair of
jeans, there is a loud ruckus behind the camera before the lights go completely
out and the video ends. She folds the phone closed and hands it back to the pock
marked boy looking down at her.
“Isn’t that sick? That chick’s a whore
right!?” He doesn’t wait for her answer, not that she’s offering one. Ainsley’s
too busy swallowing down a rush of vomit and
bile,thanking God she didn't wear the pink converse to school.